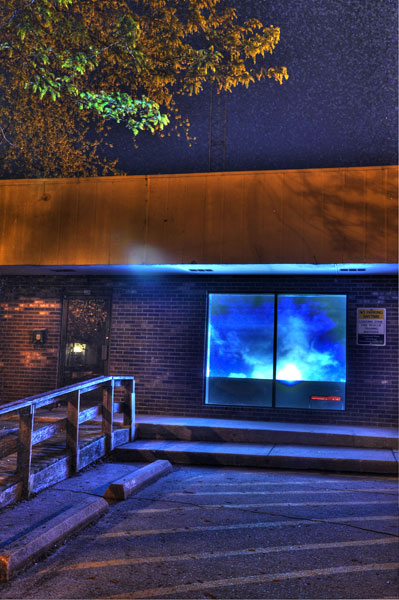 “Strange Skies” features infinitely looping scenes of the clouds and blue firmament over northern Italy. The idea: to allow American plants to experience Europe vicariously through a cinematic photosynthesis.

Reviewed in publications including The New Yorker and Wired.com, “Strange Skies” is humorous, conceptual, and environmental it its targeting of an audience both human and floral. Keats calls it “a travel documentary for plants.”

“Strange Skies” has been exhibited at venues including the Berkeley Art Museum, in California, and at the nonprofit A.C. Institute, in New York City. It is designed for screenings in- and outdoors. For interior shows, Keats creates a kind of movie house for potted plants. Here in Columbia, Serial Box Projects will rear-project “Strange Skies” into the window of its usual Hitt Street location, playing to trees and shrubs across the street. We encourage everyone who attends the opening to bring along a houseplant.

“Our destruction of the environment is bad news for plants,” Keats told Wired in an e-mail interview. “I think it’s only fair that trees and shrubs know what’s happening, and that they realize that the cataclysm they’re experiencing is truly global in scope.”

A critic as well as an artist, Keats divides his time between Italy and San Francisco. His artwork has been reviewed by media outlets including the BBC and The Wall Street Journal. He writes a weekly “Critic at Large” column for Forbes and is a contributor to publications including San Francisco Magazine and Art in America.

“Strange Skies” is the latest entry in the ongoing Serial Box Silent Video Festival, run by husband-and-wife curatorial team Nathan Boyer and Anne Thompson. Boyer is an associate professor in the MU Art Department. Thompson is a visual artist and writer.